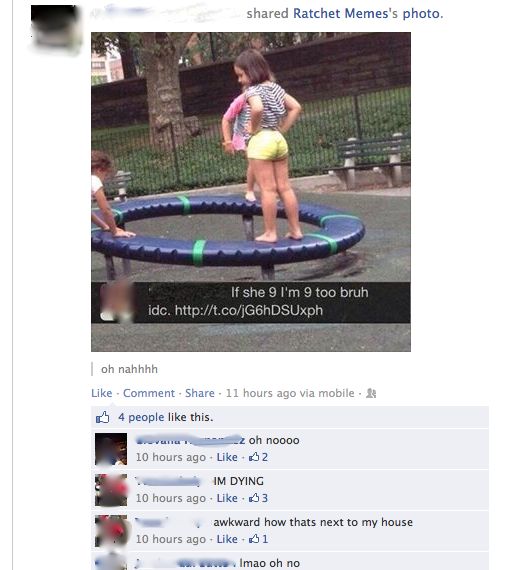 I was on facebook when a friend of my shared this picture. A young girl stands on a trampoline, surrounded by other children. Normal situation. The appalling part is that according to this post, a young man posted and commented on this picture saying  “if she 9 I’m 9 too bruh”. Honestly, I don’t even know how to properly respond with words other than disgust. Not only did this young girl have her picture posted on facebook, she had her picture taken most likely without her knowledge. If this isn’t an example of the exploitation of young girls and sexualization of them, I don’t know what is. Yes, the man probably meant it as a joke but it really isn’t. After seeing this, I expected outrage in the comments to match my own but  found ones like ‘lol’ or ‘lmao’, as if it was something to laugh about.

I wish I could offer a realization or textual association but I can’t get past the fact that I am actually witnessing a child being sexualized and objectified. I know that it happens but I’ve never actually seen it directly. It’s terrifying and extremely upsetting.

Comments are moderated. If you don't see your comment now, don't worry. It's in the pipe! Cancel reply

read us all the time!